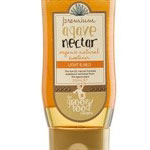 I buy Agave Nectar and I have been using it for a while now – in moderation in my cooking, it just helps when having a No Added Sugar diet (inc artificial sweeteners) something to give you a sweet taste and use for making the occasional dessert. Agave Nectar is now used in lots of heath products and drinks found in many health food shops and recently super markets. A few people have raised a number of questions regarding Agave Necta recently and I wanted to investigate…

“Only thing am not keen on is the agave description – if you google ‘agave health fraud’ its a bit scarey, I stopped buying a while ago. Try sweet freedom instead its made in UK from 100% fruit, cheaper and tastes nicer!”

“Did I tell you that I’ve found out that using agave nectar would be bad for me? It is mostly fructose and, because fructose doesn’t stimulate insulin production it can cause added complications for those with diabetes. The science is bafflingly complex (and I don’t claim to understand it fully) but in general the only place a diabetic should aim to get fructose from would be fruit itself since the nutritional benefits outweigh the minuses.”

So intrigued by there questions I wanted to find out more and seeing if I should be buying agave nectar after all… first step was to speak to the people in the know that brought Agave Nectar to the UK.

So is Agave Nectar an artificial sweetener in disguise?

Here’s what the folks at Groovy Food respond, I have published there entire response so that you can get the full low-down – it’s long (but informative) so be warned:

“Thank you for your email.  We do in fact know your site and really love it!  It is a fantastic support for people with food intolerance’s and I myself have recommended it to many people….

We have also been delighted to see our Agave recommend on the site.

We also get some customers saying negative stuff about the agave….much of it taken from some American websites.

We are still quite a small company but began bringing Agave Nectar into the UK from Mexico in 2006.  It has long been a well known and very popular product in the US and we have been able to make it available in the UK and it really has taken off.

The Groovy Food Company’s Agave Nectar is an excellent natural alternative to sugar and artificial sweeteners.  It is completely pure, organic, unrefined and free from any processing chemicals.  It is lower in calories than sugar and 25% sweeter so less is required to gain similar sweetness to sugar.

Importantly, our Agave Nectar has a very low glycaemic index due to its high proportion of natural fructose.  Subsequently, it is an ideal sweetener for those with special diet considerations or who monitor their glucose intake. With its very low glycaemic index level it keeps blood sugar levels balanced so there are no highs and slumps associated with sugar, honey or other syrups.  We have had a great deal of positive feed back from people who suffer from diabetes and are now delighted to have found a sugar and artificial sweetener alternative that they can enjoy.

Some of the negative feed back we have had relates directly to an American online magazine article which has been copied and pasted by many other sites, without any back up information or actual research into the validity of the claims.  We have only had a couple of enquiries about this article which I do suggest you take a look at…you may have come across it.  its at http://www.naturalnews.com/024892.html.  We have put together a ‘standard’ answer to deal with queries about the article which even the editor of natural news explains is controversial and not necessarily their opinion.  Please do read the article and then carefully our answer to it, which has been put together after a great deal of research.  It seems that natural Agave nectar is being mixed up with high fructose corn syrup and this is where problems are arising.  I felt if you saw our standard answer, it may help you to answer any queries you may get too.

Once you have looked at the natural news article, below is the reply to the few queries we have received about it:

We are aware of this article and a couple of others  by the same authors that are being copied on to many US websites, unfortunately without much back up research.  As the Natrual News Editor does point out, they do not agree entirely with the statements and are mainly concerned about some of the very low quality agave present in the US market place in an increasing amount.

In the US, where Agave has for many years remained one of the most popular alternatives to refined sugar and artificial sweeteners, there has recently been negative press concerning Agave Nectar and it has been proved many times that the source of these complaints are in fact often made by companies and individuals with conflicts of interest, often aligned with competing products. Please be assured that these claims are well balanced by the increasingly large number of websites claiming the virtues of Agave Nectar.

Our Agave Nectar is the product of the organically grown Blue Webber Agave Plant in Mexico. After harvesting, the large pineapple shaped core of the plant, known as the pinas, is crushed and milled. All raw juices are collected. The juice then undergoes a process of filtering to various levels to produce the Rich Agave Nectar and the Mild, the mild being filtered for longer. The filtered product then undergoes hydrolysis, gently heating the juice to a maximum of 161 degrees F (70-72 degrees C). This is the final stage in the production of the Agave Nectar. We do not claim ours to be a ‘raw’ product.

We have visited the manufacturer in Mexico and seen for ourselves the high standard of the manufacturing process which allows us to confidently import the product into Europe.

The organically grown Agave plants are cultivated and produced without the use of chemicals or genetic modification. At no stage of the manufacturing process is the Agave juice either refined or exposed to or treated with chemicals. The Agave Nectar is produced organically and certified by a European recognised body. The product has full traceability.

For every batch produced we receive full certificates of analysis and samples for approval.

We also ourselves independently test these samples with an accredited UK based Analytical Consulting Chemist.

We must emphasise that we only import from accredited organic suppliers in Mexico and we are therefore unable to comment on websites that make claims about the manufacturing processes undertaken by non- organic producers .

There is a great deal of negative press surrounding fructose but this is the fructose found in High Fructose corn syrup, manufactured using chemical processes and high refining.  Agave Nectar fructose is completely different, ours being organic and natural  manufactured without the use of any chemicals or refinement.  They are very different products but increasingly Agave Nectar is being linked and confused with High Fructose Corn Syrup.

We have also heard about several US companies buying Agave in bulk and ‘watering it down’ with high fructose corn syrup.

Concerns about the consumption of fructose have grown steadily over the years due to the increasing amount of High Fructose Corn Syrup  that is now increasingly used by the food industry, especially in the US.  It is a highly refined chemically produced sweetener used in most fizzy drinks and processed foods.  Its addition to so many products has lead to many receiving very high doses of High Fructose Corn Syrup on a daily basis.   We are unable to comment on the effects of High Fructose corn syrup as it is not a product we would ever include in our foods and it would be unethical for us to make any negative claims.  However, it is unfortunate that such a refined fructose is so often confused with a natural organic syrup that has long been used in moderation as a sweetener.

Critics of the article you sent us have also claimed that the comments made by the authors, follow laboratory testing which involved massive doses of pure clinical fructose being fed to rats regularly.  This is not the same  as the  normal moderate daily use of agave nectar in the course of our meals.

Our Agave Nectar is a natural and organic product which is completely free from chemicals and refinement in the manufacturing process used in its production. Although high in natural fructose, it is an excellent alternative to refined sugar and artificial sweeteners.  It has a very low Glycaemic Index and is a slow release carbohydrate which will keep the blood sugar levels balanced and allow the body to absorb it slowly, avoiding the usual sugar rush we associate with sugar, which allows its use by diabetics. Agave Nectar is a sweetener and ideally used in moderation and not in very high doses.

Please do bear in mind that Agave Nectar has been used for many many years in the US before it became popular in Europe and then the UK. In that time, people have been enjoying it without concern as an alternative to sugar.”

Phew that’s your lot – love to know what you all think. For what’s it worth I go by what my body tells me, I get no highs or lows when using Agave Nectar (which I do when using sugar), I love the taste and when used in moderation to avoid sugar I think its great, so I will still buy Agave Nectar when I am next in the supermarket.